Skiiing is fun, don’t get me wrong. But Canada is big. Really, really, really big and it’s got so much more going on in every season that doesn’t involve strapping yourself onto two giant lolly sticks and pushing yourself off the side of a mountain. So if you’re a little overwhelmed with the place, need a few suggestions about what to do and where to go that isn’t skiing and that won’t disappoint, take a look at a few of these tips from Mrs P and I.  They certainly aren’t exhaustive but you can be damn sure you won’t regret doing them.

Drive through the Rockies from Banff to Jasper

Following the route of the Rocky Mountaineer train, route 93 takes you through Jasper National Park and gives you some of the best sights the world has to offer. 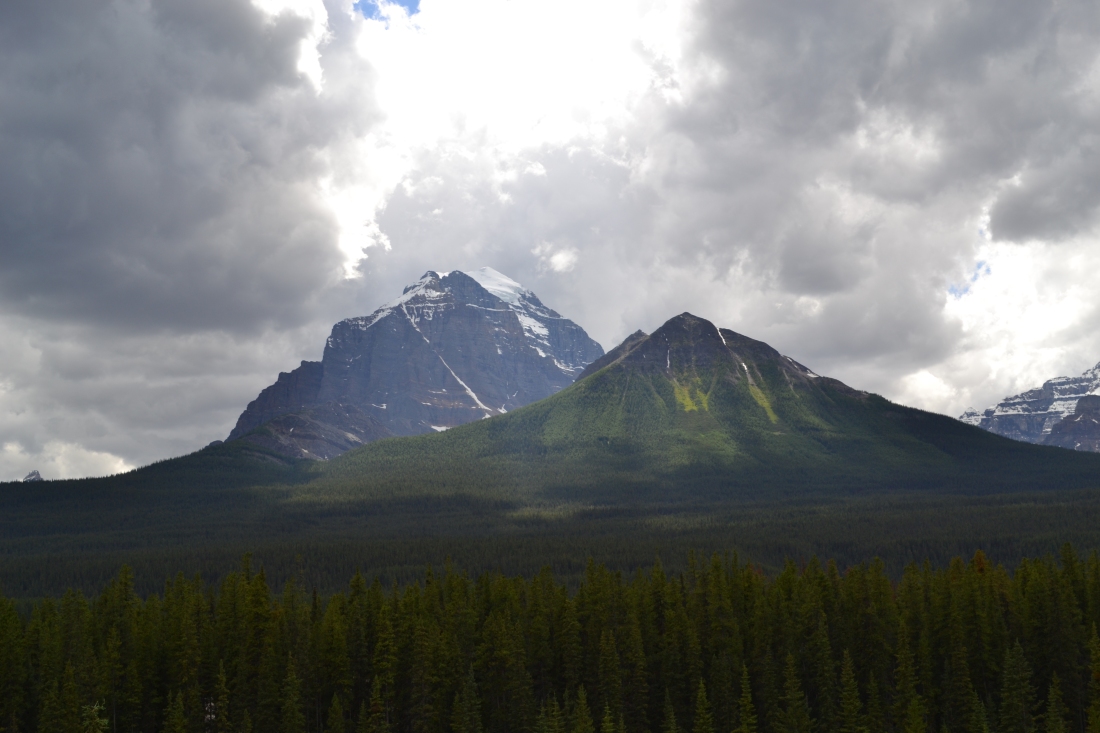 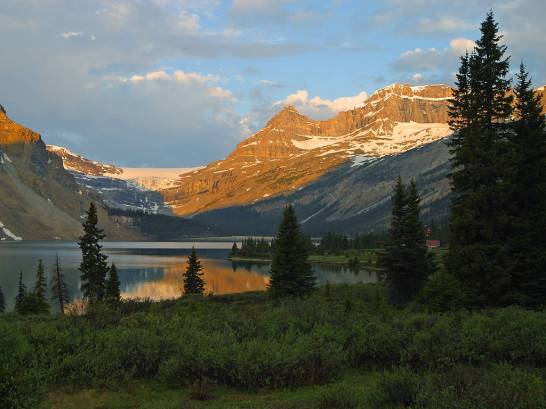 One of the things we learned about Canada is that once you get outside of the main towns and cities, it’s like your camera get’s a new ‘awesome picture’ mode because quite frankly you just can’t lose; every snap is a winner. After a while, your friends and family will say that they’re getting bored with seeing all of your ridiculously amazing photographs every time they come around to your house, but take no notice – secretly they want to look at them all again!

Once at Jasper we took the Jasper Sky Tram to Whistlers Peak to get some perspective. The sights right across Canada are pretty damn good but this was one of the best. Jasper is a tiny town that punches way above it’s weight in the world rankings of amazing views. Mind you, the ones down at the bottom are pretty good too. 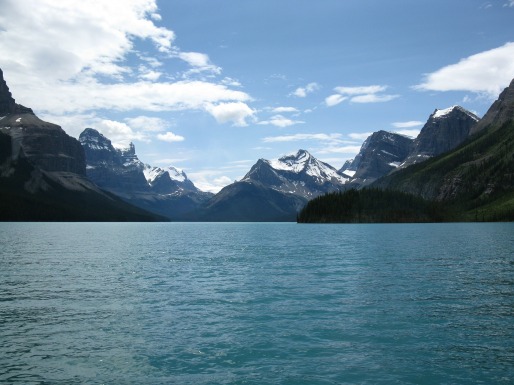 Sleep on the shore of Lake Victoria

Despite feeling terrible about taking advantage of the fact that some total idiot gave planning permission for the building of a totally inappropriate hotel slap bang in the middle of one of the most beautiful places on the planet, you too can wake up to a view like this. 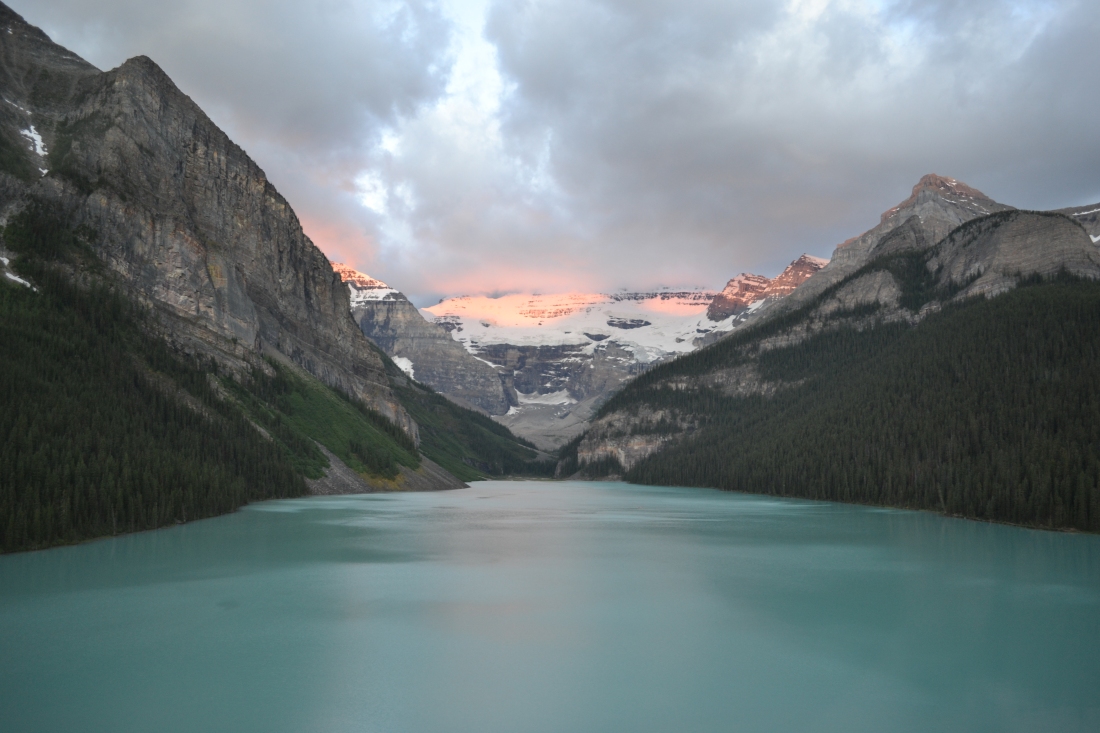 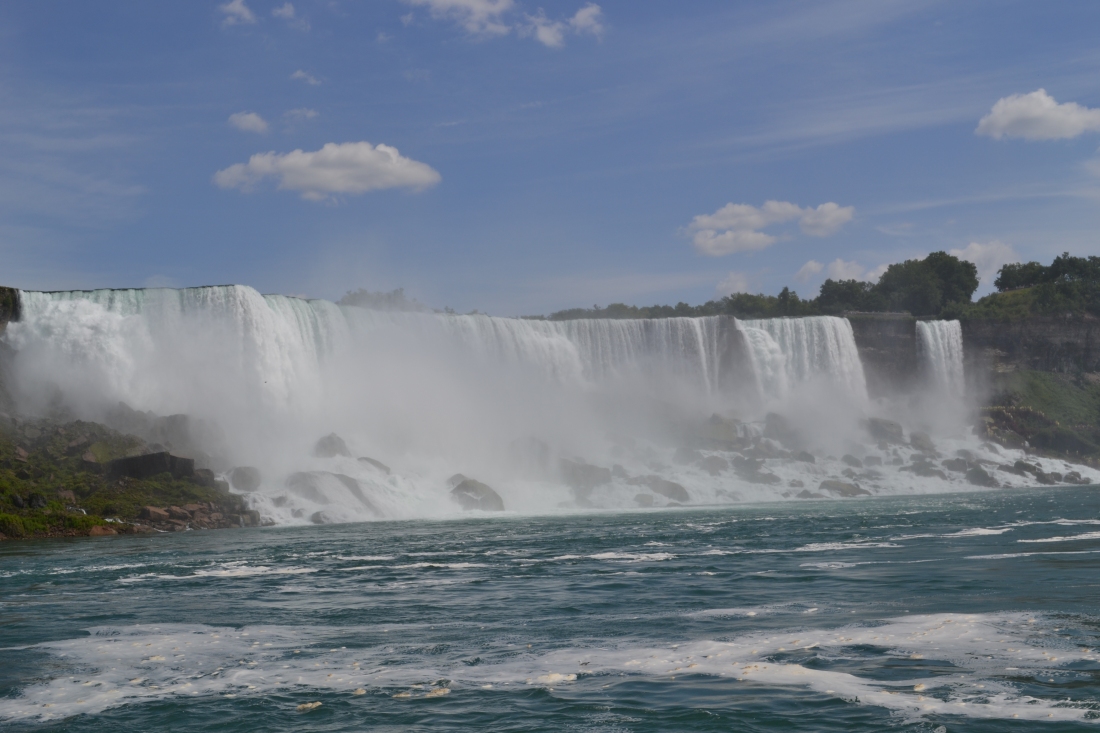 You can visit the falls by helicopter but we wouldn’t bother. Book yourself on the Maid of the Mist and experience the whole thing with a glorious full-on-in-your-face-drench-a-thon and get chatting to the other people in the queue. When we went to Niagara falls, we met a 6 foot 4 inch Texan man called Pete with ginger hair and a massive handlebar moustache who wore a a t-shirt 2 sizes too small for him and pair of hot pants. Yep, that was a good day.

Take a boat trip out of Toronto

We flew into Toronto and looking over the city, it was certainly impressive out of the plane window but we wanted something a little more immediate so we signed up for one of the water tours to go out to Centre Island. While we politely agreed with the tour guide how impressive it was that some of the bridges there were built ‘almost 100 years ago’, we thought it would be rude to point out that we’ve probably got pencils that old lurking in the back of the drawer somewhere.

The best thing about Toronto though is not how old (or not) things are, but how new. This is a new city and it’s still all shiny and clean – I would make the most of it while you can! As you can see, dominating the skyline is the CN Tower – the views from the top are great and the revolving restaurant does an excellent line in outrageously big seafood platters, but I’m afraid that unlike the meal itself, those photos are not fit for public consumption. 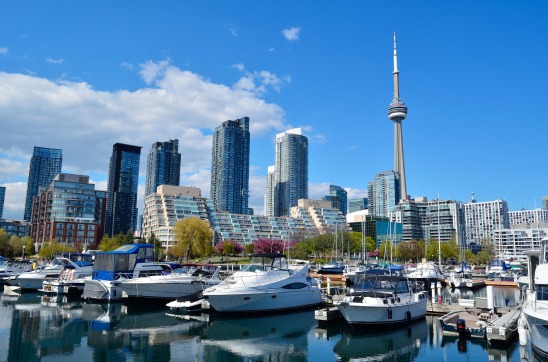 Take tea with the Empress

Situated on Victoria Island off the West Coast of Canada, The Empress is a hotel famous for afternoon tea and as Brits, we felt it was only polite to stop by. It isn’t cheap but tea is an experience to be celebrated and as we discovered having spent a few weeks there, good tea is hard to come by in Canada so we gladly paid for this one. 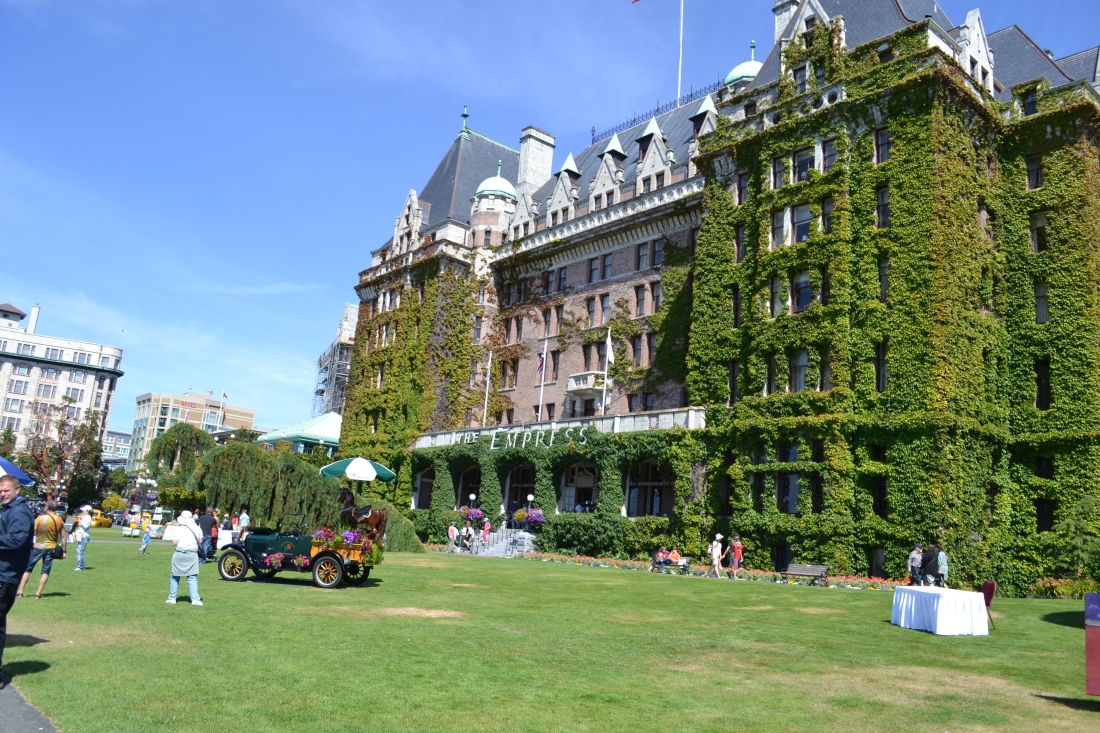 This is where you really do need a helicopter. Seeing the icefields from the air can’t really be put into words. We used the Columbia Icefields Tour company, which doesn’t seem to have a website but track them down and you’ll see the country from a perspective you never thought possible.

If you’re icefield adventures are still not satisfied then you can trek up the Athabasca Glacier – the official page seems to be here, but that’s a terrible website without much information. We just rocked up to the icefield discovery centre here and got on a snowbus so we’d suggest you do the same. 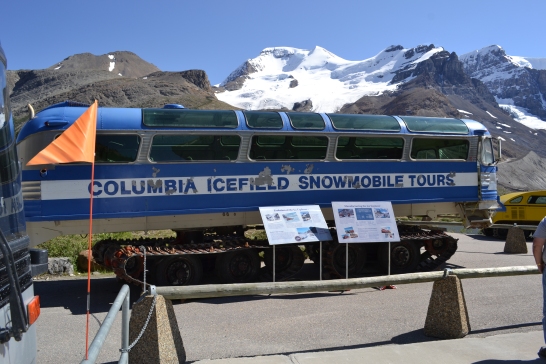 Sometimes the world gets a bit too much and you need to stop for a minute or too. Don’t worry, Canada has got your back. Find a lake and hang out for an hour, you wont regret it. 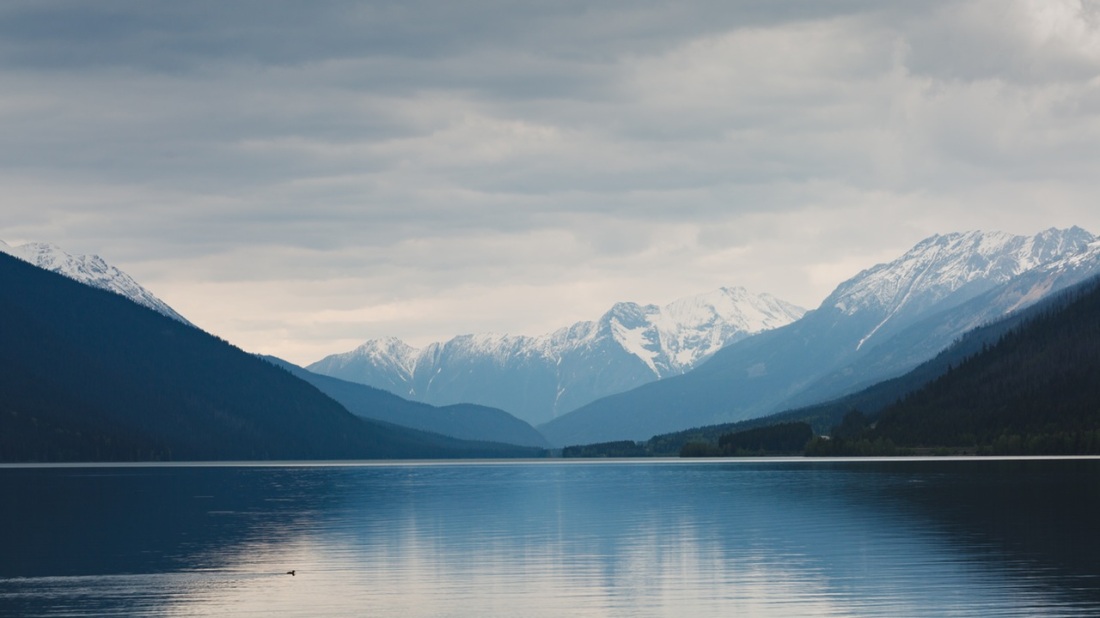 We traveled up Route 93 and then on to Route 16 before taking the 5 back down to Kamloops. If ever there was a time to stop the world for a little bit, this is it.

Say hello to the local wildlife

You are never going to be short of wildlife in Canada; Orca, grizzlies, elk, moose and a few Chuck Norris upgraded goats were only a few of the prizes we saw during our trip. Taking a boat ride out of  Vancouver was one of the best whale watching tours we’ve ever had and you’ll be spoiled for choice as there are loads to choose from. You won’t always be lucky but pick your time well and you’ll be rewarded with seeing these beautiful creatures exactly where they are supposed to be, rather than cooped up in a tank somewhere. 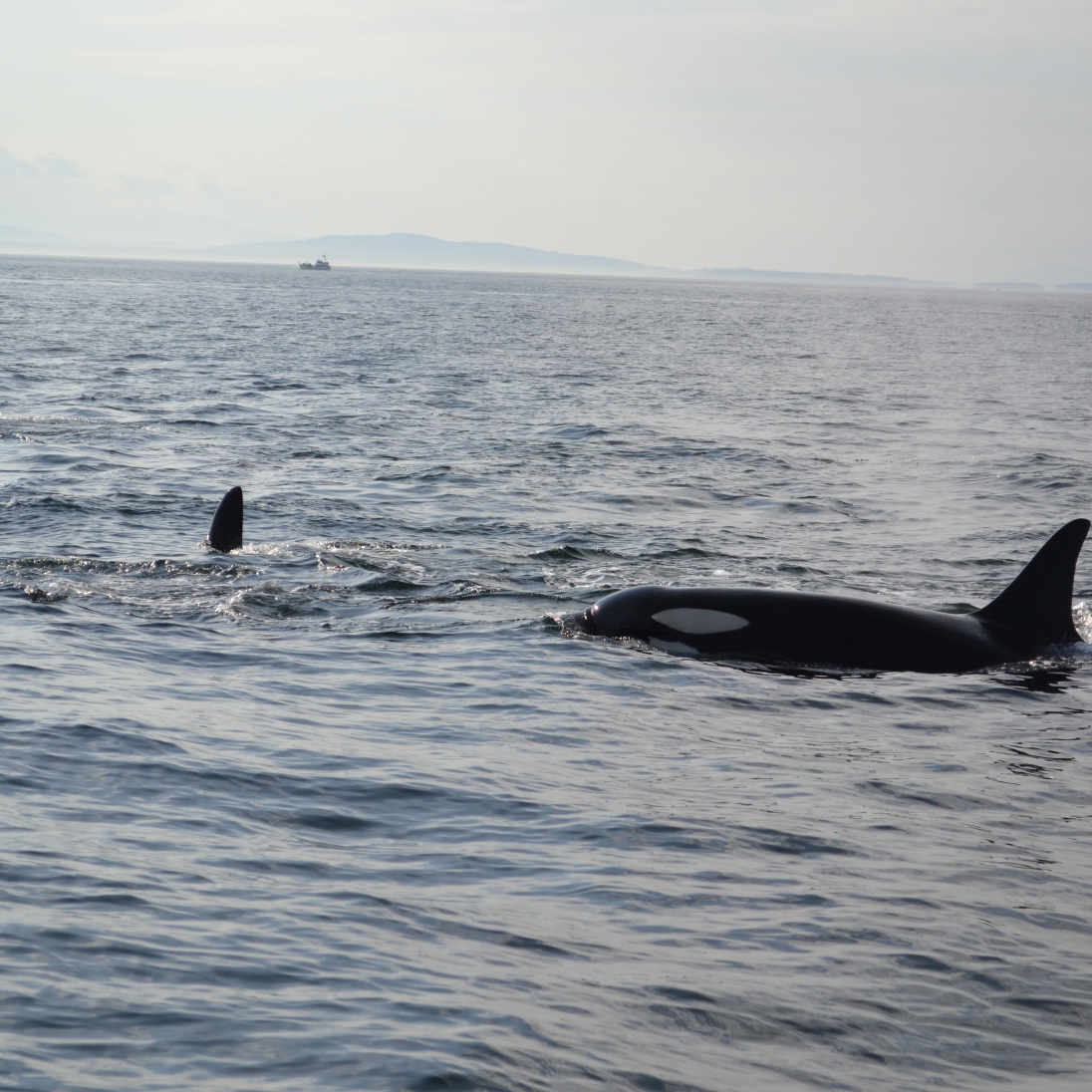 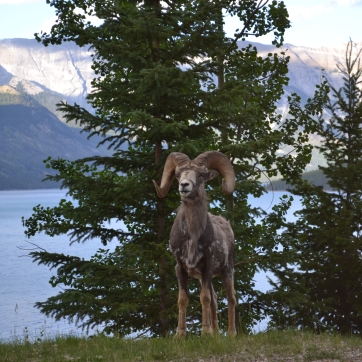 Enjoy the Honda Celebration of Light in Vancouver

The Celebration of Light has been running in Vancouver since 1990 and each year features three different countries over three days competing to be crowned the best. The fireworks hit the sky over the bay so make sure you bag a spot on the beach early because it gets rammo.

Our time in Vancouver, and Canada in general in fact, was far too short and we came away saying that if we were ever to be persuaded to move over to live in harmony with our Canadian cousins, it would be Vancouver where we would like to land. The city is great, the beach is great and the sunsets, well, we reckon they’re some of the world’s best too.

We loved Canada.  It seems to offer everything you could ever need; you want the worlds’ finest cities? You’ll find some of the best here.  Stunning, unspoilt coastline and plenty of sunshine? Say no more. How about activities for every season? Check. Fancy some time out away from everything?  Oh yes. And finally, need some grandiose perspective as a gift from the natural world? Well, look no further.

We flew with Canadian Affair, which apart from sounding like a trans-atlantic club for promiscuous couples also still seems to be offering really good deals on non-stop flights. There were so many things to do, places to be and people to meet that choosing just ten is impossible. We reckon you could go 100 times and experience something new each time; catch a baseball or ice hockey game, dip your feet into glacial waters, watch the salmon run, enjoy a hot tub on the roof of a hotel overlooking the city, kayak the coast to name but a few of the things we tried or wanted to see while we were there.

Where ever it is you choose,  I beg you please go somewhere, anywhere – do some of these things, or these, or even these!  Life is for living, so what are you doing still sitting here? Make some memories and tell us all about them!