You know what? I fancy a take away tonight. You probably do too but then comes the age old question; curry, Chinese, pizza or kebab? If you think about it a bit more, you might come up with a couple of other options; Thai, or BBQ maybe but what you really want is a plate of pasta or chicken from your favorite restaurant. But the truth is that you can’t be bothered to go out and they don’t deliver… or do they?

Now just to be totally up front, the title of this post may have been a little misleading because this is not going to be a review of Jamie’s Italian and that’s for two reasons. Firstly, Deliveroo asked me to review their service rather than anything else, and secondly the food was so bloody awful that I would just end up wasting the rest of the post ranting about it. I think Jamie Oliver the guy is in all likelihood, a genuine fella who probably has the best of intentions. But as for Jamie Oliver the brand, my opinion can best be described with reference to the Disney movie Ratatouille (and which self-respecting foodie hasn’t seen that movie?). Well if Alfedo Linguini didn’t get as far as his own range of Gustaeu cosy corner garden chair sets or potato mashers with integrated silicon scraper for a more-than-reasonable 13 quid, then he probably wasn’t far off it.

So any way, back to Deliveroo and from their London based inception in 2013 they have certainly grown fast, they want to bridge the growing gap between restaurants that don’t offer their own delivery service and punters who can’t/don’t want to go out. It’s a pretty simple concept so when they launched in Milton Keynes a couple of months ago and asked us to give them a go, it seemed like a win win scenario but there was a small problem. I loaded the website, great. The website was slick and easy to use, modern and a winner from the off. I punched in my postcode as requested and got a big fat nothing. I was outside of the delivery area. Not a problem I thought, I’ll just have to make it more of a communal evening and drop round to Suburban Gent’s house to eat my dinn… Nope. Also not available for delivery. OK, that’s annoying. In fact, of the next 3 addresses I tried only one was successful and that was my office but I’ll be damned if I’m going back to work to eat a takeaway on a Friday night. Even if it is free. It’s clear that the delivery area is limited because the participating restaurants are all located in the centre of town which becomes a problem when most people who try to use it, don’t live there.

So Deliveroo got parked.  Until it was that the weather changed last week and along with the sun, a whole new set of options presented themselves. Therefore, armed with a picnic blanket and the postcode of the local cricket ground Suburban Gent and I were able to test just how flexible Deliveroo are prepared to be.  Having settled down to watch the game on the side of the pitch, I downloaded the app and fired it up. Just like the website, it was very easy to use and the location service found us straight away. In fact, the map function allowed me to pinpoint exactly where I wanted the delivery which was perfect. We moved on to the available food options. Deliveroo is designed for mainstream chains who don’t run their own delivery service, so putting aside opinions about Milton Keynes having too many chains choking the area, Deliveroo has most of the big names on it’s books; Wagamama, Bella Italia, Zizzi, Byron burger and Mr Pretzel to name but a few. And of course, Jamie’s.

We were told our delivery would be with us within 25 minutes  and we pretty much scoffed at that prediction! But, to be fair, our driver rocked up with 2mins to spare – a very impressive thumbs up when takeaway delivery times are usually bad examples of guess work at the best of times. The hot dishes were hot and the cold dishes were cold, the driver was friendly (if a little confused as to why I wanted to take his picture) and the whole process was perfectly executed. To get a cross section of experiences, we ordered a salad, chicken, garlic bread, pasta, pizza and some deep fried polenta. As I say, I’m not going to waste much time on these because I’ll just get drawn into a spiral of indignation and ever increasingly violent adjectives. 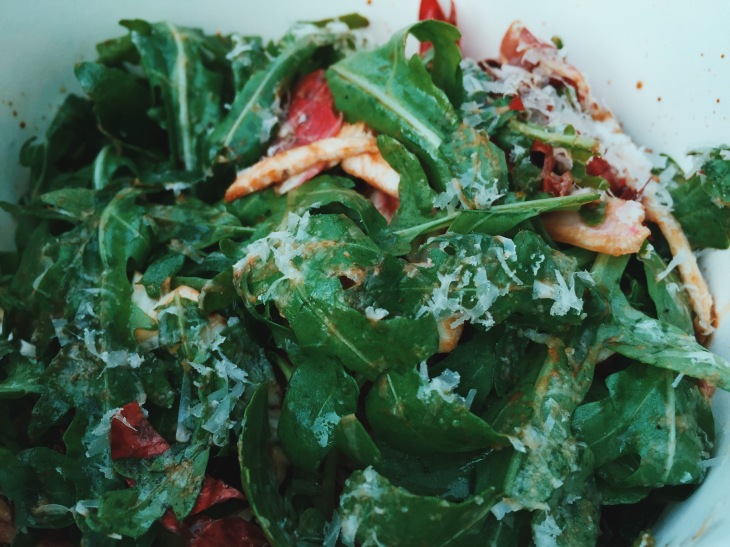 Salad – at least it traveled well 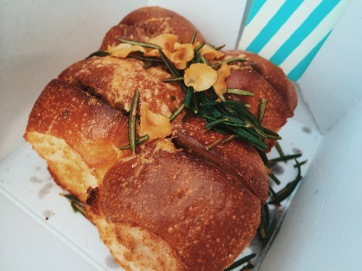 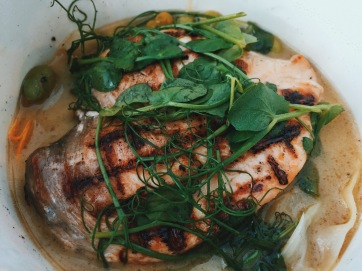 Chicken Primavera – not a winner 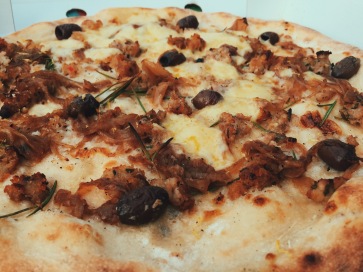 Sausage Pizza – it was a pizza with sausage 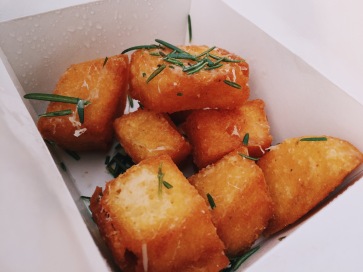 Pasta with tomato sauce – what else can I say?

We’ve not reviewed much takeaway here on Two Men About Town, Affamato being a notable exception, but as the quality increases I’m sure we’ll re-visit the genre if only because (he won’t mind me saying) Suburban Gent is a man for whom the takeaway  is one of the main food groups. In the meantime, the main thrust of this is that there is no denying that I liked Deliveroo, I really did. As a service they solve exactly the problem that they promise except that’s exactly their Achilles heel as well. Providing a takeaway that’s as good as a restaurant is a laudable aim but the above would have cost me fifty three quid if we had paid full whack. For a takeaway that is serious money and while pricing is arguably Jamie’s fault, but for me it highlights that at least in Milton Keynes Deliveroo is ultimately hamstrung by the quality of it’s partners, who in this case was overpriced and total toss.

Thumbs up for Deliveroo but takeaway from a restaurant that’s priced at restaurant prices plus delivery needs to be better than this otherwise you might as well do it yourself. The only thing worth paying for here was the polenta and at £3.65 even that doesn’t pass the Mrs P value for money test. It must be said that in London, Manchester or even Leeds there is a much bigger range of good quality smaller restaurant groups who give Deliveroo it’s purpose but I’m afraid that without that type of product to deliver, a delivery service who pitches at a higher level of food than your local curry house is going to struggle.

UPDATE: since this review was written, Deliveroo have assured me that the delivery area is expanding – so who knows, check it out and you may be lucky!

4 thoughts on “Deliveroo and Jamie’s Italian, Milton Keynes; a review?”