Now, avid readers will know that we at TMAT have gone through a lot of pubs this summer and we hope to visit a lot more in the coming years. We’ve already seen some good, some really good and some must try harder but if it’s pubs your interested in, then the Mac Daddy of them all, the El Presidente, the Top Dog is the Hand and Flowers.  There are a few pubs who have got themselves a Michelin Star, but only The Hand and Flowers has got 2. So it must having something special, it might take you a year to get a table but a three course lunch will only set you back 20 quid.

Perhaps if Mrs P and I had  looked at the menu more closely before we arrived, we would not have been so surprised. But I, as I suspect most people do, simply assumed that Michelin star meant tasting menu and prepared my wallet accordingly. What a mistake.  The Hand and Flowers refuses to conform to the formal Michelin club of high class formality that usually accompanies the mortgage busting bill. Instead, Tom Kerridge (owner and TV’s weight loss personality of the year) has done his damnedest to build a picture of his perfect pub and clearly refused to bend to the over complicated expectations of the upper echelons in gastonomic society. And I loved it. However, it is the fact that The Hand and Flowers is so keen to keep itself rooted in being ‘just a pub’, that does inevitably beg the question: what is it about this one that deserves those marks of foodie excellence for?

SPOILER ALERT: just to warn you, there was absolutely zero wrong with this meal. At all. The review (if I can legitimately call it that) that follows will be nothing short of a lavish and sycophantic celebration of the pinnacle of pub perfection. Prepare yourself.

The bar area is open, light and airy with seats to sit and chat – it’s fairly small so during cross over times, it’s pretty busy with diners coming out of the restaurant and people waiting to be seated but considering that this area is also open to the public so you can pop in for a quick double Michelin Starred pint (you know, as you do), it’s very forgivable. In the bar, I thought it would be rude not to try the house beer which was smooth, and surprisingly light. Certainly not as bitter as I had expected, it made for very easy drinking alongside the plate of pork crackling with paprika.

We knew this was no ordinary pig skin this, the table spent some time discussing how these things are made. Various theories were discussed but as expected, the reality proved more specific than even we had considered; a pig tendon sou vide for an absurd amount of time until cooked, then dehydrated, then deep fried. The result was a puffy pig crunch that melted into an palate coating, savoury  dream with every bite, like the best prawn cracker you’ve ever had – just with more pork.

Into the restaurant proper we went and started with some house made soda and sourdough bread. The butter arrived along with a some DIY salt and pepper to adjust to your liking.

Then starters. I had Pork and Mushroom Terrine with dill – and what a lovely example it was too. Chunky, with bags of flavour and a light jelly to top the whole thing off, there was no messing about here. Also in the mix was the Glazed Omelette of Smoked Haddock and Parmesan, which was recommended by our waitress. Smoky, creamy and luxurious, Mrs P said it reminded her of my own fish pie which I publicly laughed off as ridiculous (but secretly fist pumped and made a mental note to buy her those shoes she said she wanted for Christmas). 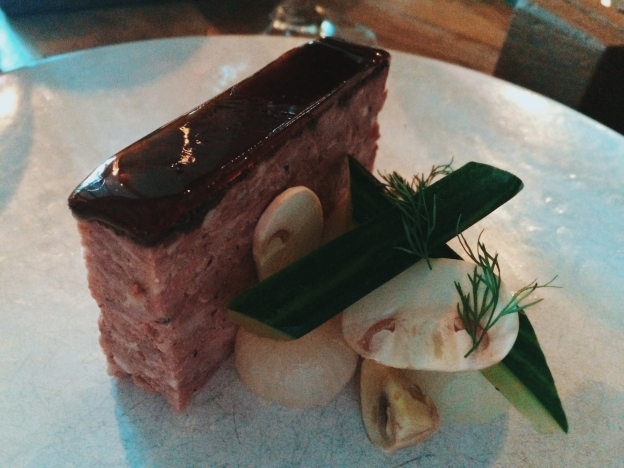 Pork and Mushroom Terrine with Dill, Pickles and Toasted Sourdough

Then on to the main deal and I enjoyed some of the best venison known to man. The only regret I had was that there wasn’t enough of it, but everything that was there (especially that baked celeriac) was amazeballs. Not having enough meat was certainly not a comment that could be levied at Mrs P’s hunk-o-beef;  because quite apart from being the nicest steak she’s ever eaten (and she’s eaten a lot of steak in her time), also in the contention were onions rings, the cabbage, the chips oh my! It all played together so well that it shone like a beefy lighthouse in the darkness of a world without grass fed, artisan reared, higher welfare bovine royalty. 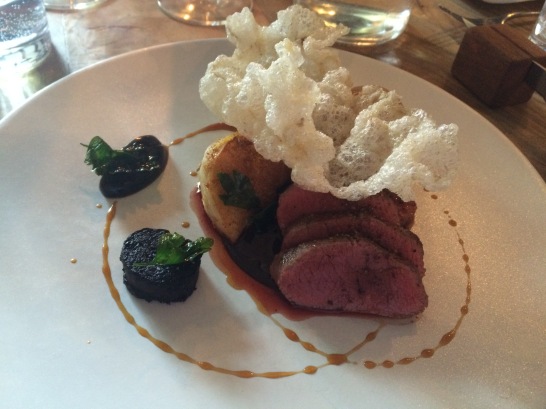 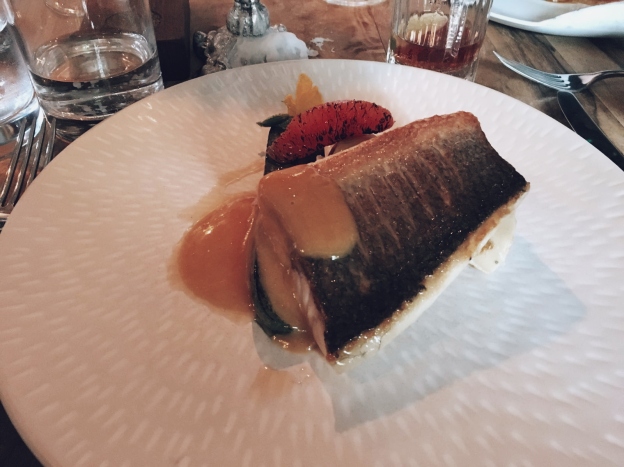 Also seen on the table was a plate of Seabass (which was of course, delicious), and a loin of pork which defied description in it’s loveliness. The titles of each dish are too long and extravagant not to put them in print here so you too can groan in envy and dream of eating them all. At the same time.

I mean honestly; if you haven’t just dribbled down your shirt already there’s something wrong with you. None of your pin-pricked triple cooked chips here either, who knows how they do it, and quite frankly who cares because if this kind of crispy, fluffy chip perfection can be yours for 6 quid per portion, why is there any excuse for anything less?

We moved on with a conflicting sense of both disappointment on leaving behind the mains and anticipation for what was to come, but we needn’t have worried. The puddings, were as if there could have been any doubt, world class. I had the toffee tart with roasted grapefruit sorbet, which was un-freaking-believable. I could have taken more sorbet considering the size of the tart slice but then I love the sweet/tart/bitter combo. Mrs P, hardly lucked out with the strawberry soufflé though so don’t be feeling sorry for her and looking down the sweet menu, we decided en mass that there were too many too choose from and we just had to have as many as possible. To that end we also ordered the Lemon and White Chocolate Bavarois*, Apple and Custard Slice as well as the Hand & Flowers Chocolate and Ale Cake with Salted Caramel and Muscovado Ice Cream. If that seems like a lot of puddings you would be right, but it took a year to get a table dammit! We were going to make the absolute most of this lunch if it killed us.

Lemon and White Chocolate Bavarois with Honeycomb and Raspberry Sorbet 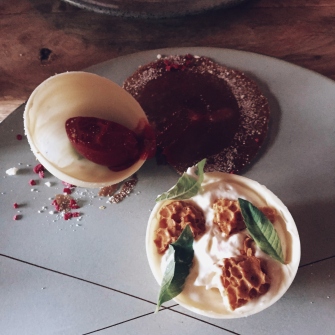 Service was quick, discrete and enormously agreeable; nothing to fault surprise, surprise. But then we got the bill which was a surprise.

It’s true, you can get the three course set lunch at The Hand and Flowers for 20 quid, which is absolutely absurd: I would love to know who the hell waits so long for a table only to decide that £10.50 per pud is too expensive. But even if you take the al a carte like us, add in wines to match, you will find it hard to break £100 per person! That included pre-dinner drinks, sides, coffees afterwards, additional puddings and a tip. In terms of value, versus the quality of the product that’s just insane. So coming back to the only question we had before we sat down to eat; if The Hand and Flowers is just a pub, does it really deserve it’s 2 Michelin stars?

Well; Yes actually. Yes it does.

*Yep, we had to do a google search for Bavarois too.

UPDATE: The Hand And Flowers is a bit special but we’ve got great fine dining on our doorstep too. Paris House has just had a refurb; check it out; Paris House refurb.