We love a good night out at Two Men About Town, so when our good friend Emma at Glasgow Foodie kindly forwarded on an invite to attend the launch night and review new restaurant Yuu Kitchen in London, we jumped at the chance to check it out.

Yuu Kitchen Review – What’s it all about?

Yuu Kitchen, located on London’s Commercial Street in Aldgate is the brainchild of Stephen Lowe (of Icebar London fame) and Jon de Villa, previously of Nobu – so there is some serious pedigree at work. We got chatting to Stephen and found him to be a jolly nice chap too.

The team at Yuu Kitchen have clearly taken culinary inspiration from South East Asia and the Pacific Rim, with dishes such as  twice-cooked 7UP braised belly pork belly Bao, chicken and pork spring rolls and peanut chicken gracing the menu.

The restaurant, a casual dining affair, also carries this South East Asian inspiration, showcasing work with Manga, Asian fashion and comic-book pop culture references from Hong Kong artist Lunatic; this in many ways shares similarities with the Bang Bang Canteen in Fitzrovia which we recently visited, although the guys at Yuu Kitchen have well and truly taken this to the next level. Yuu Kitchen is cool and vibrant environment, the sort of place you would be quite happy to kill a bit of time in with a few mates over some sharing plates.

A kitchen bar selling a menu of light bites and small plates for 6 to 7 quid (ish) in London should get your attention, it certainly got ours. With the menu at Yuu classified as ‘Asian inspired’ and seeing the influences taken from such a huge continent, there is always going to be plenty on offer; however, Yuu Kitchen have to be careful not just to be a Jack-of-all Asian-trades. The food on offer during the launch was absolutely delicious and perfect bite sized samples of the attitude of the place but shouldn’t really be compared to normal service because how things work out when the kitchen are not pushed to the max delivering a small part of the menu will be understandably different.

We loitered with intent by the kitchen bar like a bearded hamster wearing a suit and a 6ft flamingo who had been forced into an inappropriately sized jumper, poised to attract any passing waiting staff with their slates of canapé dreams. There will be no blow by blow account of each dish and we’ll stick to the highlights but please be reassured that we tried each example multiple times, just to make sure that we knew what we were talking about.

We managed to snag examples of the vegetarian spring roll, butternut and sweetcorn potsticker with sesame sauce*, salt and pepper prawns, sweet soy glazed beef as well as tofu and crispy chicken bao. 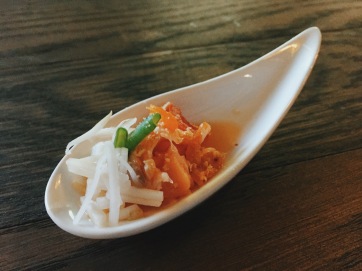 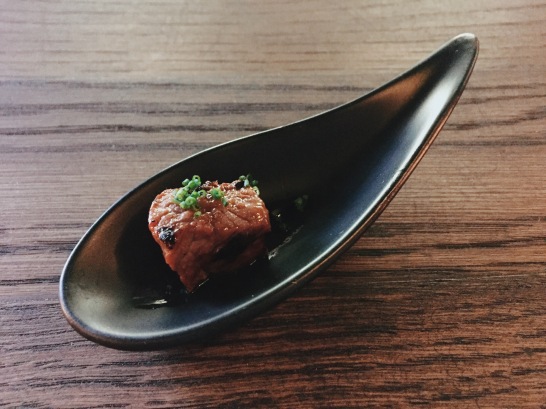 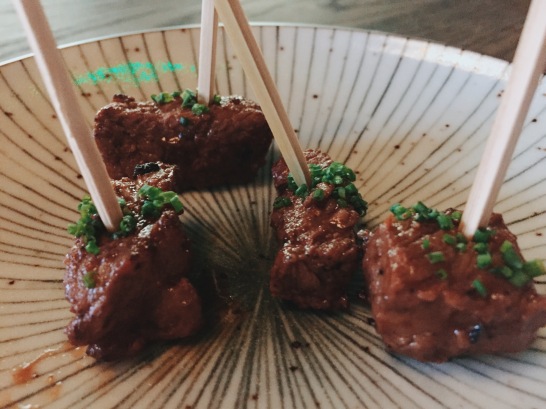 There is no doubt that the chef has immense skill and coming from Nobu that should be a given. The beef cooked in the big green egg that stood proudly behind the kitchen bar was bite after bite of sweet and savory ambrosia; much to our delight. The chicken bao was also stunning; soft and pillowy on the outside and crispy, crunchy as well as beautifully shot through with pickles. We’re pretty sure the salt and pepper prawns will be a runaway success because we liked them so much that Robsribs almost physically restrained the waiter every time he passed with a fresh batch. He didn’t though because that would have been wrong. And illegal.

If we have one criticism, which we really shouldn’t because we have exactly no right to tell these guys how to do their thing, it would be that the food wasn’t bright and fresh enough. More of those sparkly pickles please alongside some fresh herbs. Not that it all wasn’t delicious you understand but in retrospect and particularly with the bao, the balance of salty, spicy, sour, sweet didn’t pop with the authenticity that we were expecting.

However, all that means is that we’ll have to go back and take a closer look as the initial excitement of the launch dies away to see the menu as a whole. Robsribs can’t wait to have a crack at the softshell crab and pork chicharron.

With wine (still and sparkling) on tap at the bar, the different approach of Yuu continues with the refusal to add automatic service charge to the bill which is unusual in London these days. The management want staff (who were most excellent, by the way) to get their tips directly and appreciate that customers these days want to be able to express that. Feedback is the lifeblood for the service industry and customers who vote with their wallets provide that in spades.

This style of cuisine is bursting into mainstream acceptance at the moment and Yuu Kitchen with their view on food and culture is bang on trend. From it’s streetfood vendor origins, South Asian grub is here to stay and you’ll do far worse than getting yourself down to Yuu Kitchen in Aldgate to see how it’s going to going to be done. It’s delicious, it’s fresh and it’s relatively cheap, so what’s not to like?! Great work Yuu.

*Those of you unlucky enough to be following our twitter feeds last night will know that Robsribs had some trouser issues with a bit of Peanut Juice. Why have enemies when you’ve got friends like these right?