Today’s trip between meetings was to Kua’Ania on Goodge Street, an Americana-inspired (well, Hawaiian) cafe with beach shack-style decor; the chilled-out vibe, menu full of meaty classics and tasty looking shakes/cocktails is right up my street, so I’d been looking forward to this one for a while…

So much promise, then? A flying start?

Sadly, this is where much of the usual Two Men About Town positivity ends. Brace yourselves, disappointment-ville is coming.

Seated on a busy Thursday afternoon and having waited fourteen minutes for any sign of service, it was immediately apparent that the restaurant was too short staffed for the amount of covers seated, our waiter caught between my colleague and I alongside greeting and ushering new customers to tables around us simultaneously. Quite rude, but inevitable given the lack of front of house support. Never mind we thought, my colleague and I going for vanilla shakes (his with added rum) and a bacon and cheeseburger each, with a side of fries.

After a further fifteen minutes – a sign of things to come – our shakes arrived. Timing aside (as there will be plenty of opportunity to reflect on this), one could concede that these shakes were *a bit* special. Probably the nicest shake I’ve ever had. In. my. life. The malted vanilla was simply delicious – but – the mood had already soured in the twenty-nine minutes that had elapsed into what we had intended to be a quick lunchtime dash, so the enjoyment factor wasn’t as much as it perhaps could have been.

Things would not get any faster.

After chasing the progress of our mains several times as time passed, it transpired that our food order hadn’t made it to the kitchen (“Oh, I forgot”), explaining (but not excusing) the rather agonising wait for the burgers, arriving almost seventy (yes, seventy, 7-0) minutes into the service. 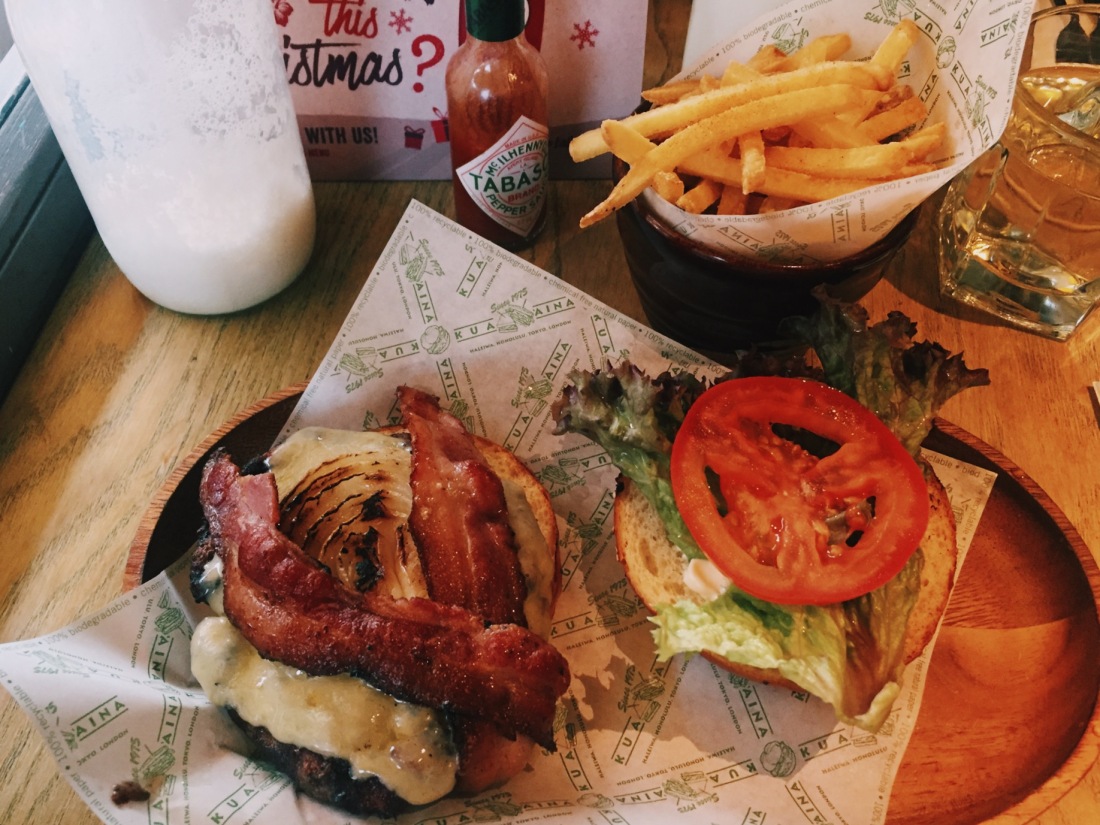 The burgers, whilst nicely presented in a brioche seeded bun, were objectively very disappointing, bland and nothing out of the ordinary to write home about. This feeling was perhaps amplified given the £9.95 cost of them which did not even include fries. Yeah, they were an extra £2.95, and by jove, they were not worth it. Now well over the maximum hour we had planned for between meetings and facing the prospect of hitting ninety minutes sat in the Kua’Aina, we were forced to eat our over-priced plates at an uncomfortable speed to get out of there and back to the office.

Surprise surprise, several chases of the waiter followed to get the bill, enabling an exit. Whilst acknowledging the appalling slow nature of the service and volunteering to waive the food bill was almost expected, the audacity to include a service charge on the bill was frankly unbelievable and borderline insulting. However, we were in such a rush and didn’t dare request the charge’s removal for fear of being stuck all day, we hurriedly paid and got out of there. What a disappointment.

Eighty-five minutes and £16.72 amassed to a hurriedly consumed (bland) burger with a side of fries and disappointing slow dismissive service to boot that even the most delicious milkshake in the world couldn’t put right. Disappointment and indigestion was not what I had been looking forward to… or had ordered.

I also have an issue with the pricing; £7 for a shake, no matter how good it is or how many unicorn tears were in the recipe, seems rather steep. However, it was the (average) burger just short of a tenner WITHOUT sides that I thought was really taking the mickey. I love me a good burger and sadly this just didn’t hit the mark.

A slap in the face would have probably felt better value for money.

The critical component of a restaurant that it ultimately lives or dies by, other than it’s food, is it’s service, both speed and attentiveness being the main components. Sadly Kua’Aina fell over spectacularly and as a result clearly has some work to do. Perhaps I caught this place on a bad day but if it can’t hack a Thursday lunch service, what hopes does it have for a Friday evening or weekend trade?