The Gastro Pub Top 50 is a publication that I suggest you all take a closer look at. It details a list of establishments that you certainly have a better chance of enjoying than any Tripadvisor reference review you care to mention. Yes it’s utterly arbitrary, yes the winners are awarded by a hidden judging panel that is un-democratically appointed and almost certainly mostly comprised of members of the white middle-class male persuasion. And yes, it will have missed plenty of worthy contenders but when you are looking around for an independent British pub dinner, it’s still as good a sure thing as you are likely to get so my advice is to get it learned.

Firmly in it’s place on this list is the Hundred of Ashendon and it was with this sure fire method of scoring maximum Husband points on Valentines that I booked a cheeky night away and we drove through the dark to Ashendon to visit The Hundred. A brief point on context here; The Hundred is not a wanky London Gastro pub thank goodness. It does not have the polished chrome doorknobs or the flock wallpaper that characterise the most pretentious of establishments. Nor does it have unpronounceable, unrecognisable and frankly unwanted menu items that usually involve putting tiny things on tiny plates with tweezers. This is a gastro pub as they should be with no airs, graces or apologies. 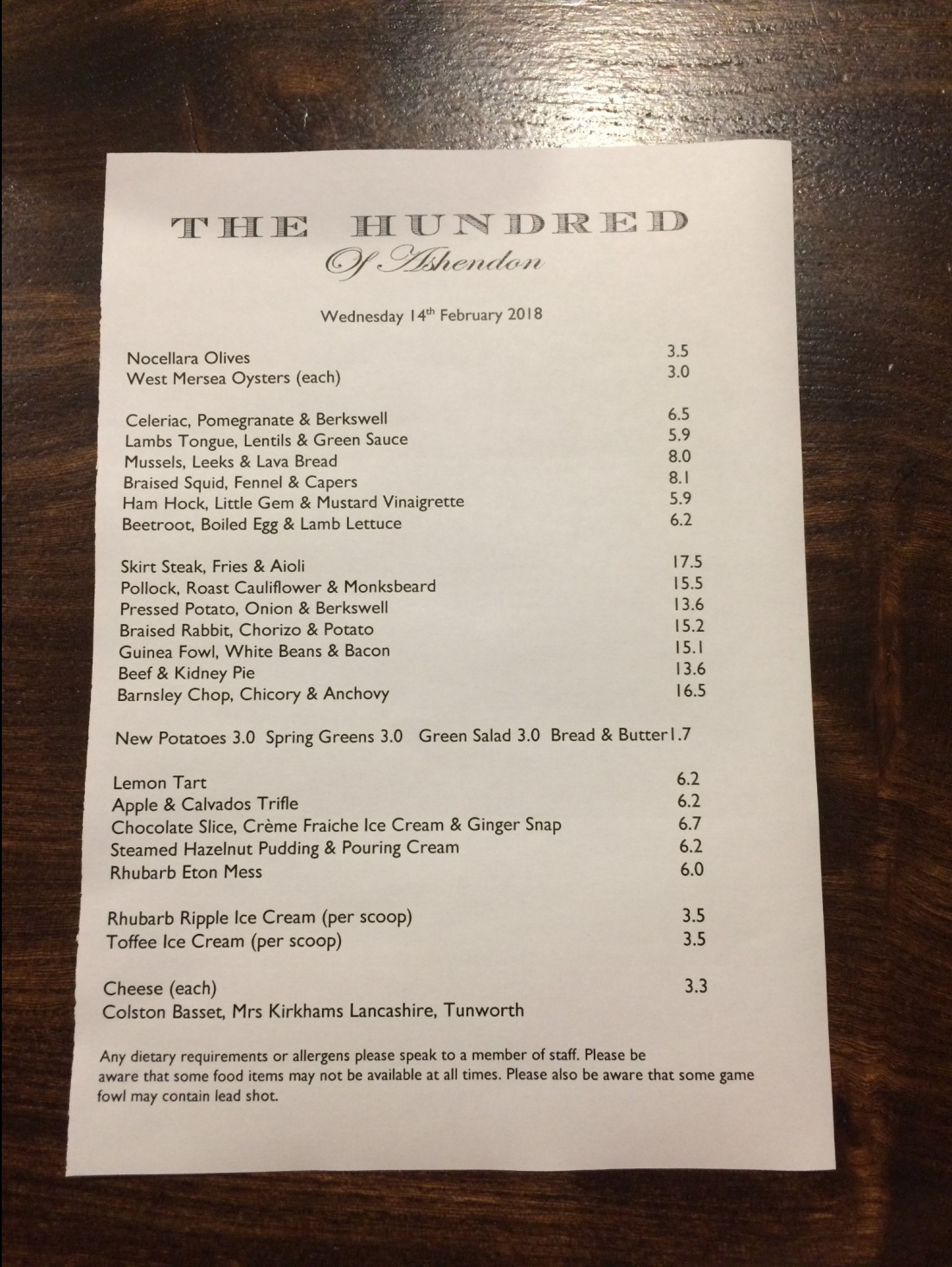 We stayed in one of the rooms above the pub because when you’re making the most of an evening, the last thing you want to do is drive back home. In fairness the rooms might be a little dated but the Hundred is all about giving you a relaxed enjoyable evening whether it be at the bar or in the restaurant. This is a pub making the most of what it’s got and for that, I applaud them. The value of staying here mid-week is nothing short of astonishing but weekend overnights aren’t that far behind and still give you the perfect excuse to explore the nearby area with an amazing dinner and breakfast option alongside the room to make the most of. 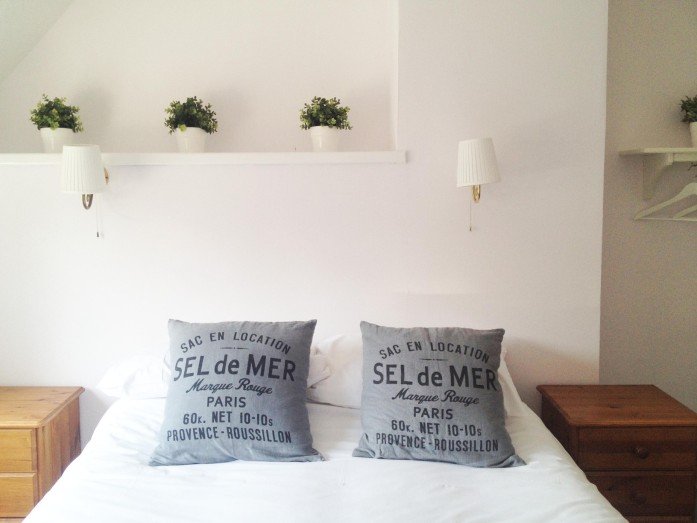 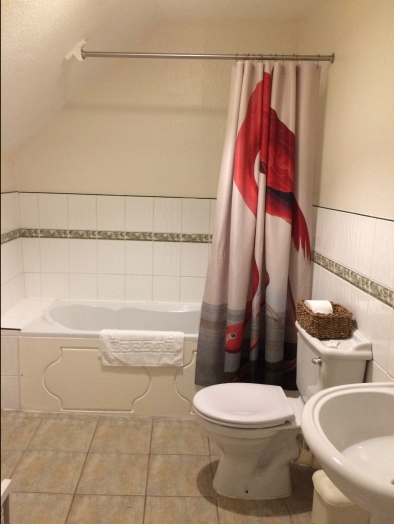 But back to my dinner, I saw oysters on the menu and said ‘Three please!’ before I remembered the last time I ordered oysters on a ‘date night’ with Mrs P.. Needless to say that I was woefully unprepared for the biblical proportions of vomit that Mrs P. is capable of producing when under duress. I still love oysters (and Mrs P.) but she has never touched another bivalve since, I can’t think why. 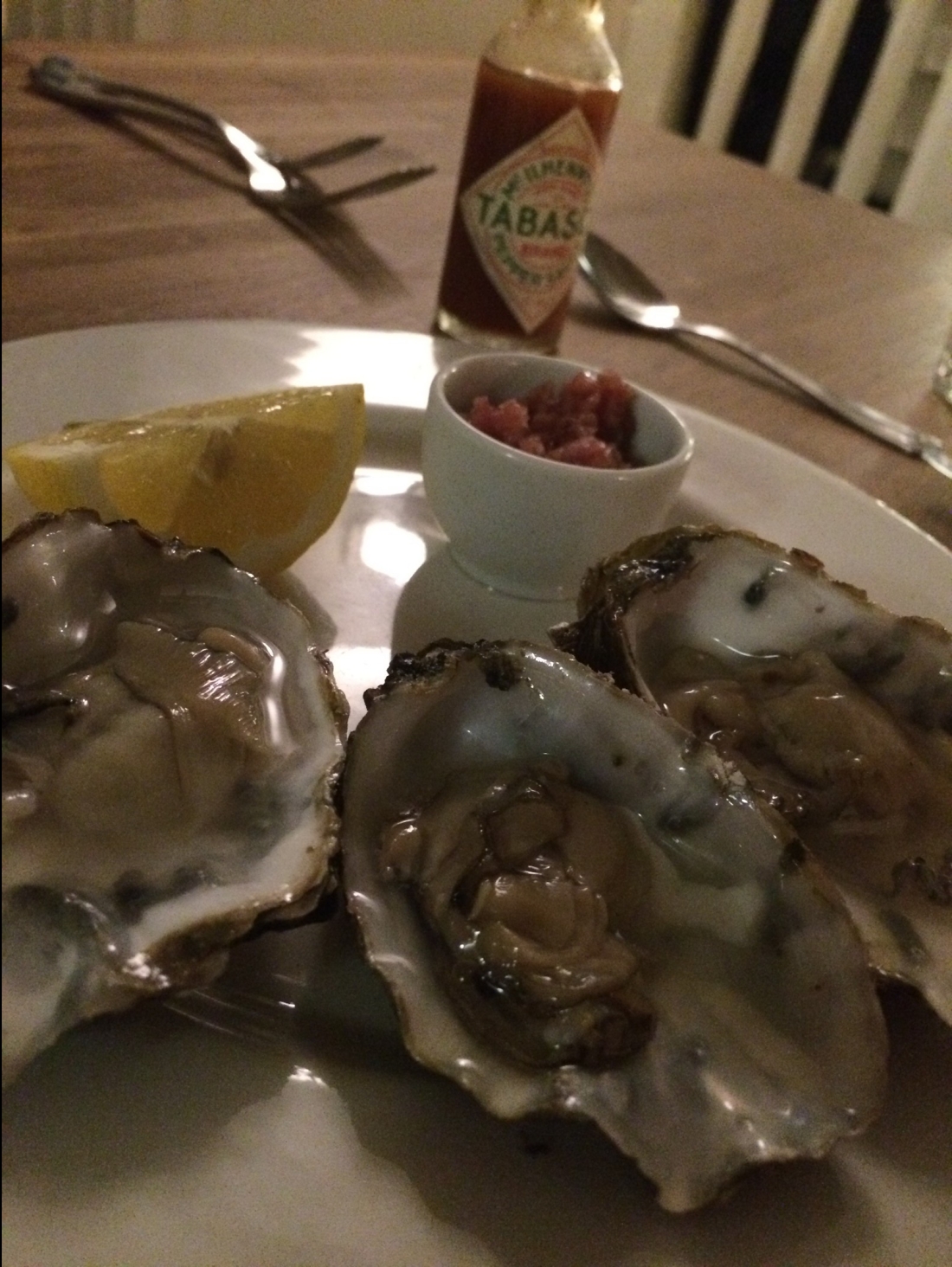 Safe in the knowledge that The Hundred would never serve up a questionable mollusc, I enjoyed these immensely and at 3 quid a pop for some real beauties with tart red onion and tobasco accompaniments, they paved the way perfectly for the kind of great value we were to see from the rest of the menu. 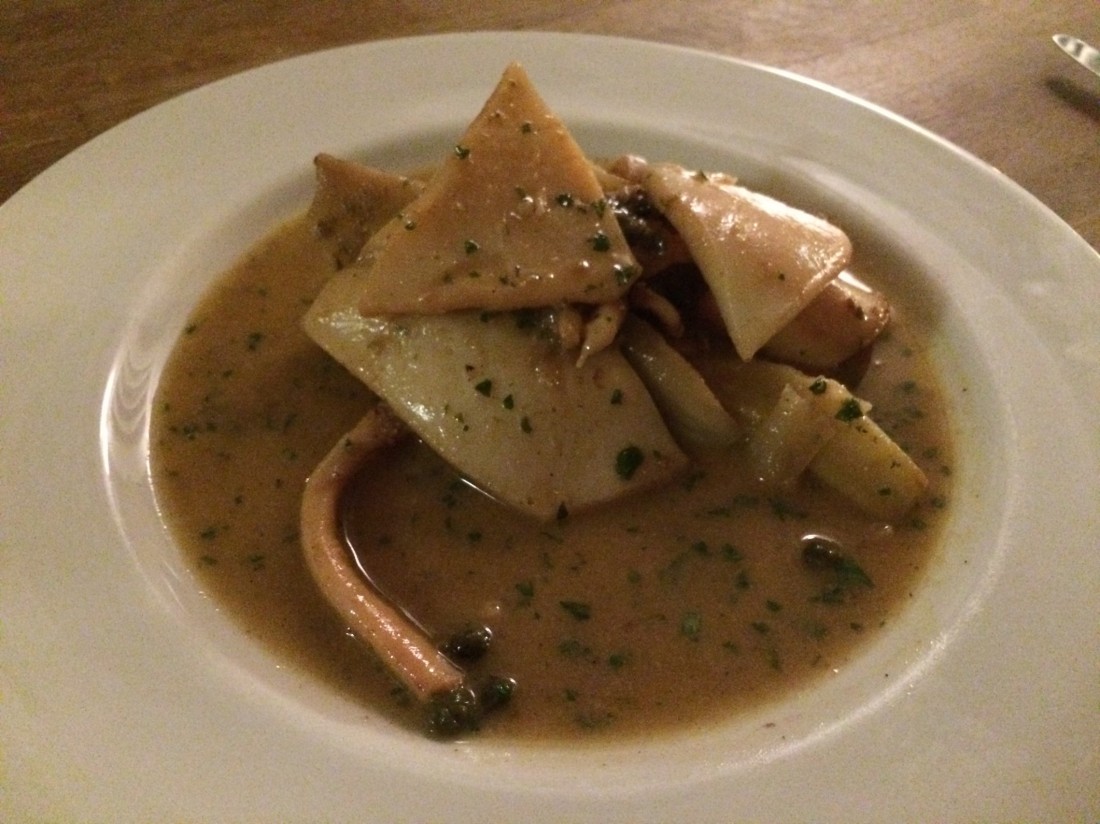 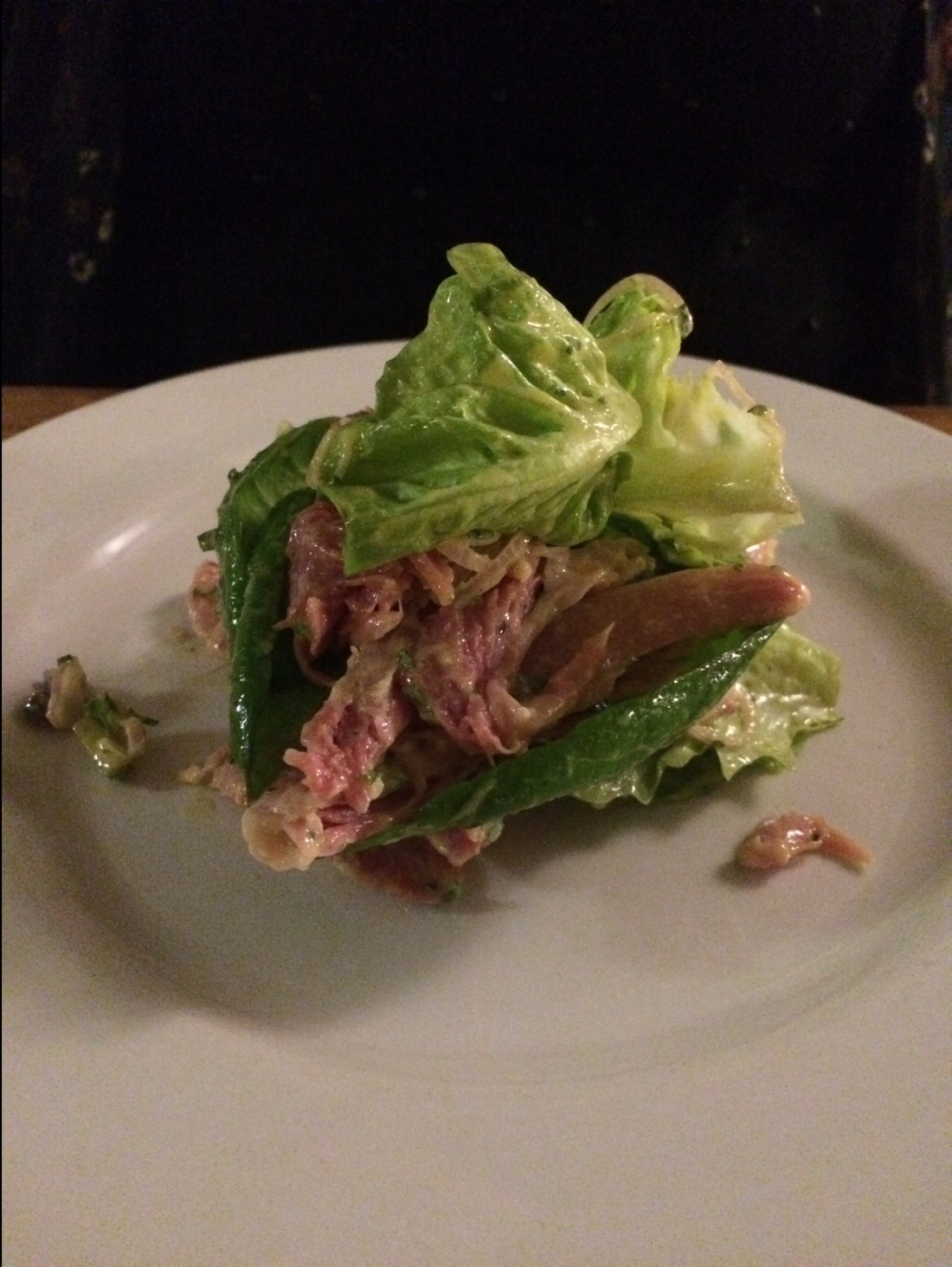 Starters started to show us where the Hundred was really at. My squid and Mrs P’s ham hock couldn’t have been more different but we enjoyed them both with the same enthusiasm. The squid was so soft it yielded at the slightest whisper of my knife and the deep sauce could have been a challenge but set itself up with the squid fantastically well. Mrs P’s hock was robust and powerful, it’s true I liked the bitter contrast of the salad with the mustardy dressed ham more than she did but it didn’t prove a problem, we just swapped plates and cracked on. Both plates were executed so deliciously that we had no bother in polishing them off easily. 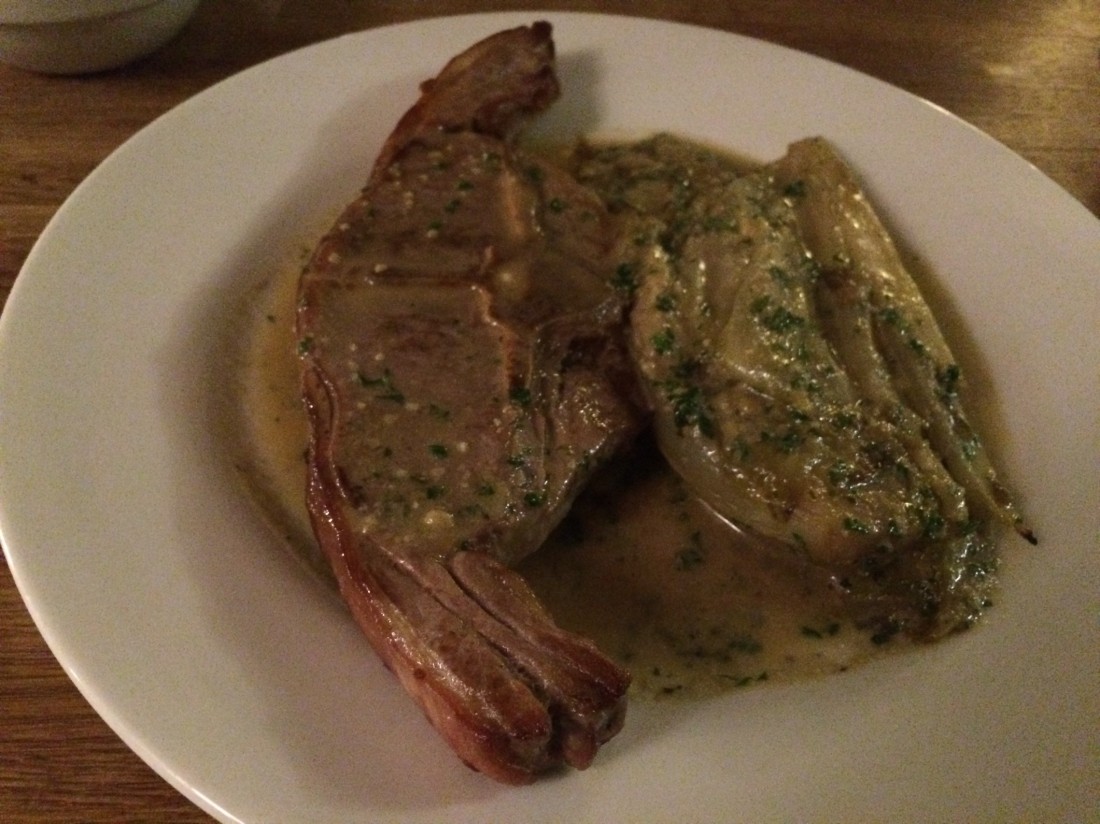 We followed those up with a Barnsley Chop with chicory and anchovy and plate of local Buckinghamshire rabbit. The Barnsley chop (a cut taken from right across the loin which therefore becomes a double sided chop, traditionally from lamb) was cooked well but proved a bit fishy for Mrs P with that anchovy sauce pushing her slightly too far out of her comfort zone, for me though the dish held no such problems with the whole thing easily working with the chicory giving a really different flash of flavour to the meat. We were quickly seeing that The Hundred gives big, punchy flavours and that Matt likes his dishes to be a new experience as well as dinner! 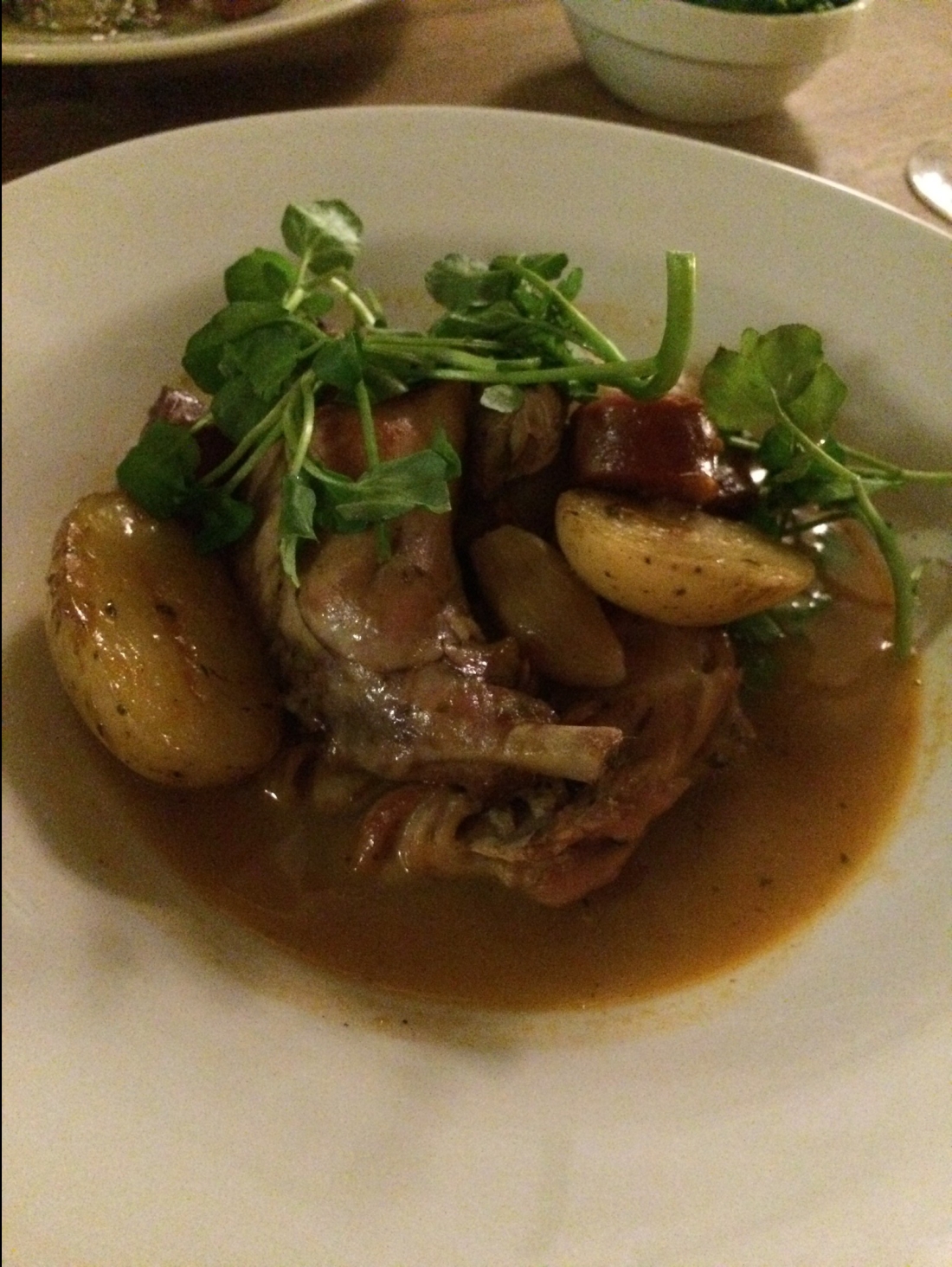 The rabbit held no disagreement between us though, easily the stand out plate of food of the night, it was beautifully soft with potatoes and veg that had soaked into all that amazing gravy. Then with a careless dash of peppery watercress over the top we were left fighting over the final chunk of chorizo and the last scrapings of gravy, it was that good. 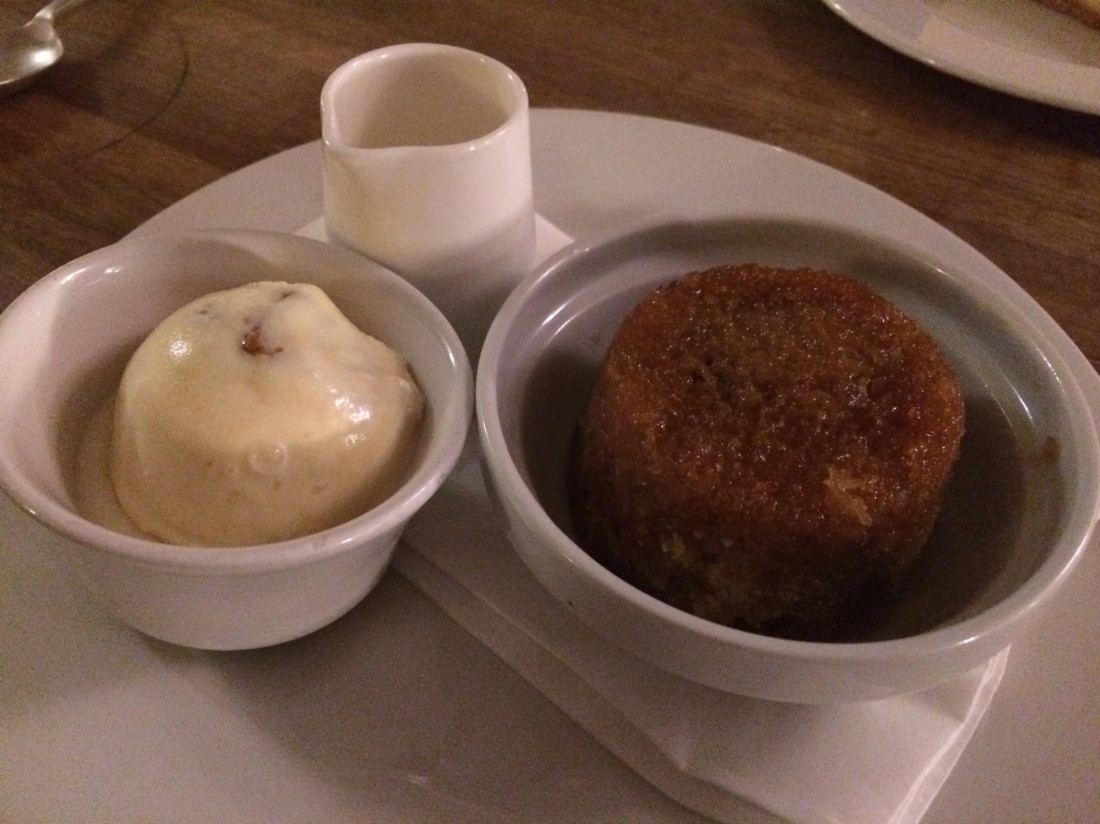 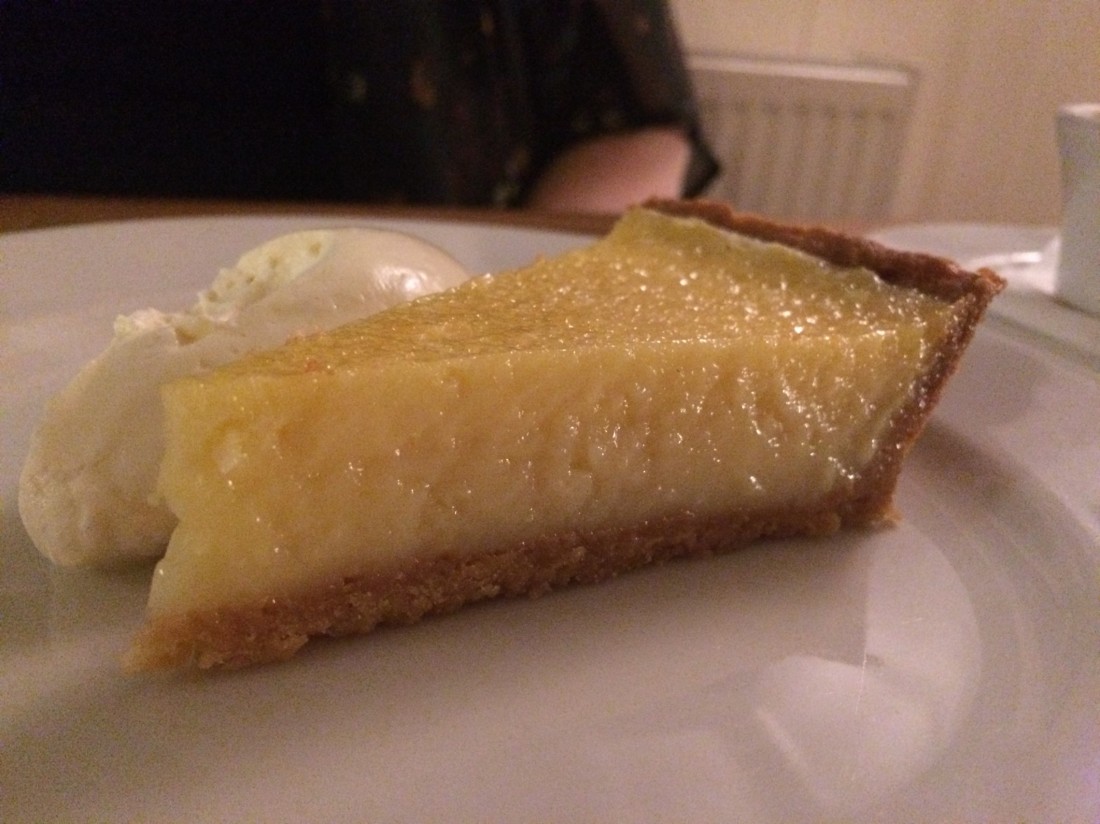 Steamed hazelnut pudding was exactly what it described and the toffee and rhubarb ripple ice creams that we felt we had to order with it were all absolutely top of their game. The pudding was light but filling, and came complete with whole hazelnuts studded through it’s soft interior, a delightful way to end the meal. Unfortunately it wasn’t all good news, my lemon tart, despite the almost perfect pastry casing, had split and was a bit eggy which was a shame but considering the level of the food we knew had come out of the kitchen that night, we put it down to a rather over-enthusiastic heat lamp and got on with talking about more important things.

The Hundred of Ashendon is the sort of pub we need more of. There’s room for your up market Black Horses and your Michelin starred Hand and Flowers and of course we absolutely need more of them as well. But The Hundred is more important than that; it represents the sort of pubs we are losing hand over fist in the UK at the moment. A pub that knows what it’s good at and is going it bloody well: local beers, local grub produced with imagination and handled with superb expertise as well as some knock out hospitality from the front of house team. There is no doubt that the flavour combinations won’t work for everyone every time and if you want the pub classic fish and chips for a fiver then you’ll have to look elsewhere. But if you are looking for something more discerning to raise the bar then put your trust in Matt and his team, they won’t see you wrong. All in all, Mrs P. And I had an absolutely fantastic time and The Hundred has become a firm recommendation for all our foodie friends. 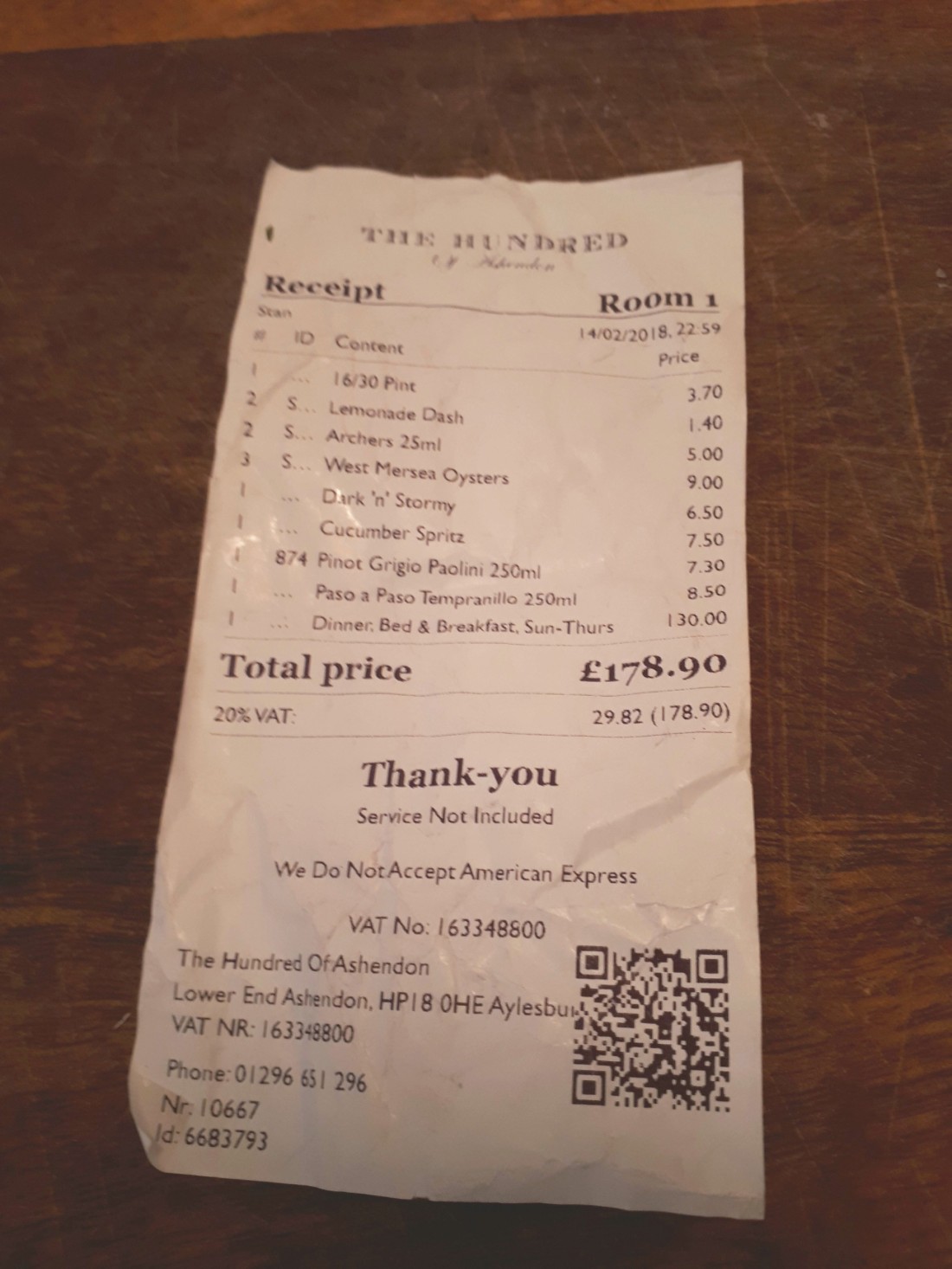 Our visit cost us 180 quid for the room, a three course dinner and a few drinkipoos. What a bargain.