We had started in Romania, had almost lost bowel control to get into Bulgaria and now we only had a few more hours to get over to Greece. It was on the bus from Sofia, Bulgaria to Thessaloniki, Greece that I met my first Millionaire. At least, he said he was a millionaire and that’s good enough for me.  In all honesty I have no idea how much money a million Bitcoin actually is, but it sounds pretty impressive. To find out more about Genaro, head on over to Germany because I’ve updated that page to tell you all about his Brexit views. But in the meantime, let’s talk all things Greek.

Fresh off the bus, I thought that the Family P. probably needed a bit of a rest so I decided to uncharacteristically crack open the wallet and spend a bit more for an air-conditioned hotel with a pool on the roof. We dropped our bags and went exploring. Unlike the rest of Greece which is understandably focussed on mostly Greek stuff, Thessaloniki seems to throw caution to the wind and tell it’s visitors all about it’s Roman Heritage. Constantine the Great seemed to love the place and most of the ruins are connected to him in some way. I would definitely say that you should get yourself on one of the free walking tours that traverse the city as you’ll get much better stories about the city, it’s history old and new as well as recommendations on how to avoid all the tourist traps.

The White Tower is obviously a go-to destination for visitors to Thessaloniki and with the audio guide you’ll learn all about the Roman years such as why Constantine the Great earned the name but you’ll also get information on a fella called Ataturk. If that name sounds familiar then you, like us, have either got Turkish relatives or are clearly a little too enthusiastically knowledgeable about your Turkish history because this is the guy who effectively created the country we call Turkey today. Considering the state of what the Ottoman empire had left behind before he came along, the creation of an entire country from the ruins of a civilisation was by any measure, an incredible achievement in that day and age. Was he Greek? Is he Turkish? I’ll leave that to others to argue but getting to know the details is fascinating either way.

Remember I mentioned earlier that we splashed out on a hotel and pool combo? Best. Decision. Ever. Thessaloniki was hot. I’m not saying it was a bit hot or even super crazy hot, I’m talking about hotter than the third circle of hell crotch-pot cooking hot. This place was so hot that for three days, the Family P subsisted almost entirely on equal quantities of ice-cream and bottled water. Our very lives were clearly in danger but I was reminded of our time in Croatia last year where survival was only possible in an air-conditioned car. It didn’t take long before I made the call.

So what should we do with our unexpectedly obtained Fiat Punto? Clearly the only sensible thing we could do was to find and climb Mount Olympus of course! Finding it was fairly easy, only a few mercifully cool hours drive outside of Thessaloniki, Mount Olympus rises from the flat horizon to pierce the clouds like the home of the Gods that it is. We drove along roads, gravel tracks and then followed some kind of donkey path that we almost certainly shouldn’t have gone down before hiking into the forests of this beautiful mountain. We enjoyed a picnic of hot sweaty cheese and more water before turning around and heading back.

Just before we reached the foot of the mountain and dived onto the nearest beach, we visited an amazing monastery built at what had to be one of the most inaccessible points to build a building. These guys clearly didn’t like being around too many people, which considering it was built almost 500 years ago when no bugger came up there anyway says quite a lot. 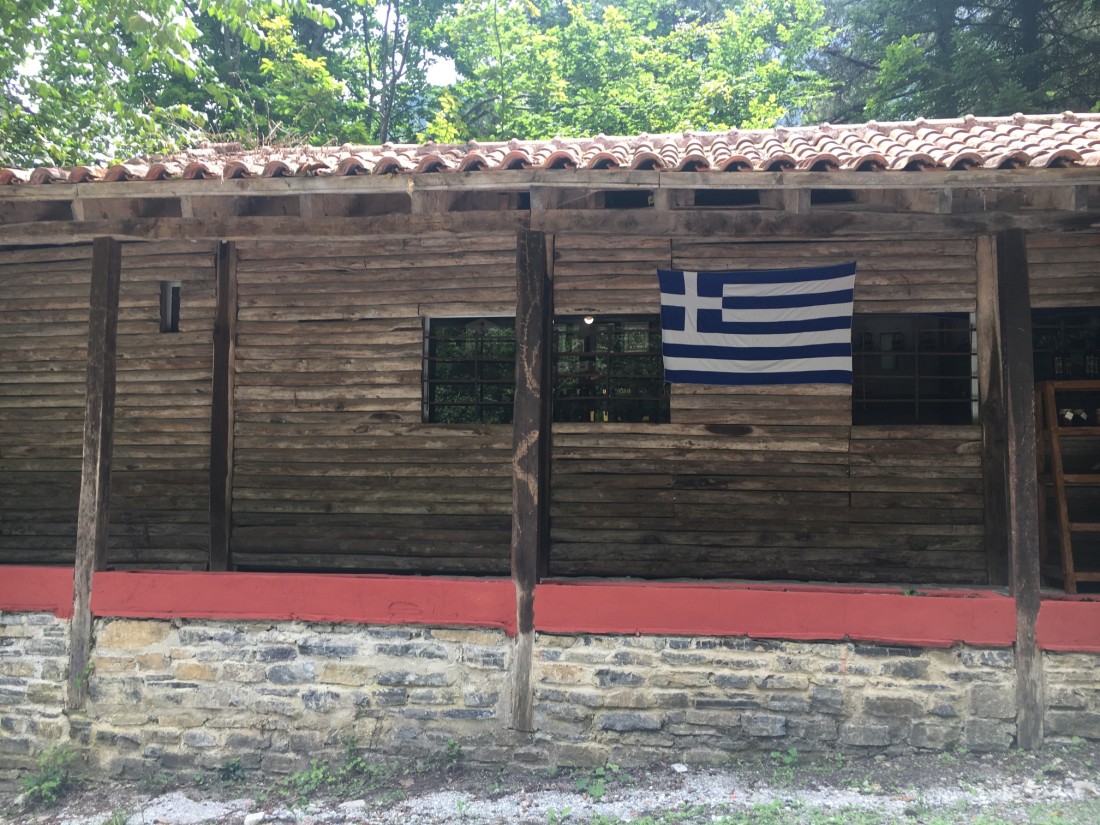 Our man in Greece was Dion. A Thessaloniki resident born and raised, he had had the opportunity to travel beyond the Greek border but was surprisingly patriotic as a result. Dion was proud of Greece and the international influences that being in Europe provided. He was also fiercely enthusiastic about the way history had proved that to survive, cities like Thessaloniki and countries like Greece had to embrace the benefits that a greater union within the EU would bring. Of course, he said considering Greece’s current financial situation, being a part of the EU is best for Greece and he is happy to be a part of it’s future even though the repercussions of their financial problems will continue to be very hard. And as for the UK, well if the issues he’s seeing in Greece is anything to go by (40% unemployment and an economy that is so heavily dedicated to tourism that it teeters on a knife edge on a daily basis), it’s not surprising that the UK wants out. ‘But what about the benefits?’ He asked, ‘Why can’t the UK understand what they are getting from somewhere like Greece? I mean – look around, it’s beautiful! Why isn’t this just as valuable as the Stock Exchange and all the money in the city?’

Why indeed Dion, why indeed.

Where it all started